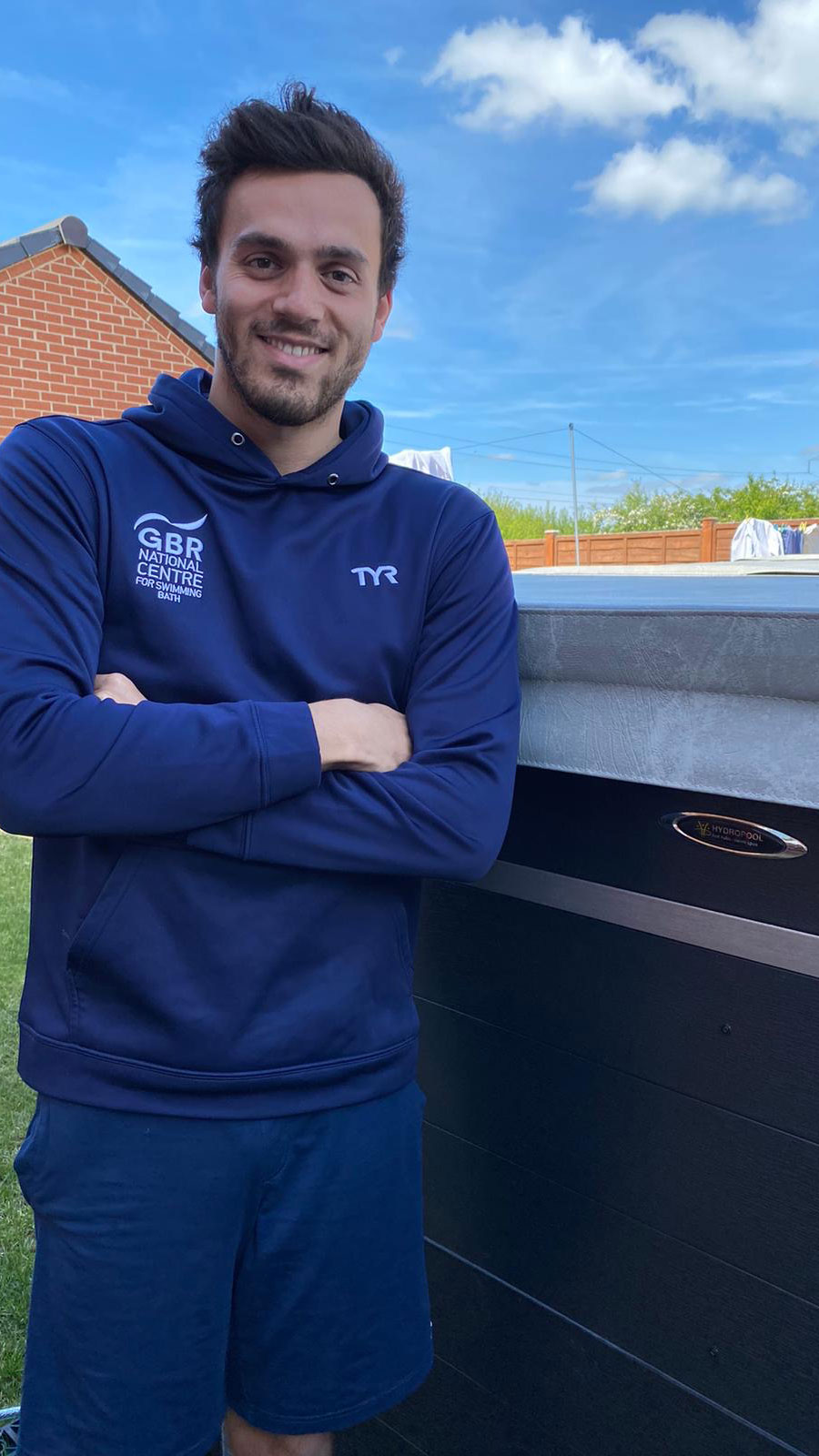 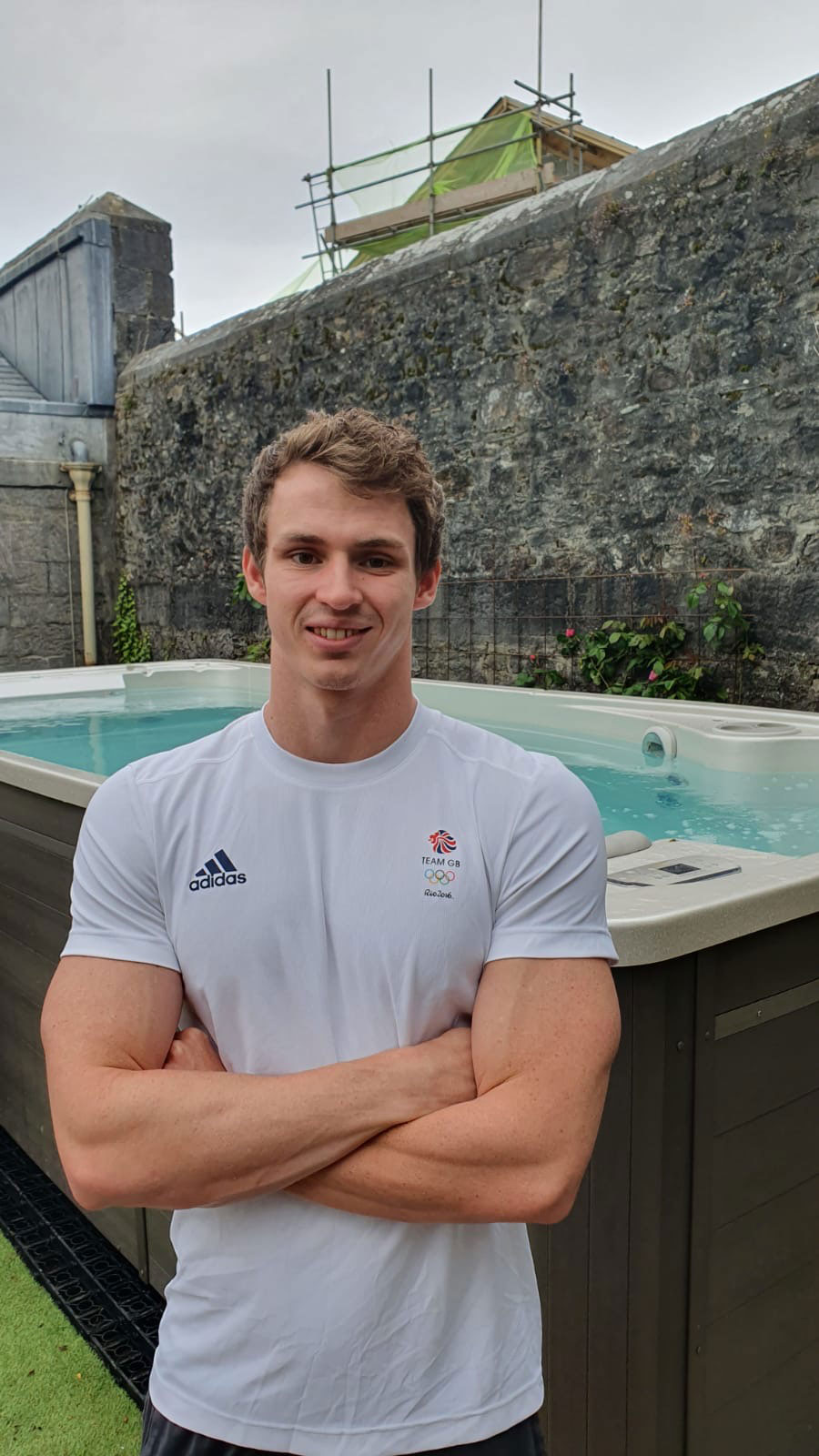 Hydropool Inc, in partnership with Bedfordshire Hot Tubs have announced a collaboration to allow our GB Olympic Swimmers to continue to train at home for Tokyo 2021 during the current UK lock down.

Fans will have already noticed GB swimmers posting videos of their training through their social media account and updates will continue to be shared in the coming weeks.

Jim Rumley, owner of Bedfordshire Hot Tubs Limited who retails flume pools called Swim Spas made by Hydropool Inc from within Poplars Garden Centre in Bedfordshire has led the initiative from the beginning and discusses how it all came together:

“At the beginning of March when the Corona virus was just starting to have an effect on our everyday lives, I was talking to a friend of mine, Ed Baxter (a GB swimmer, training in Loughborough) about what was going to happen over the next few months as pools and leisure centres looked like they would soon be closing to keep people safe. After talking it through we realised, we could use one of my display pools at the store, before it was open to the public, as it’s geared for all swim levels. None of the GB team have a pool at home, unlike the other top swimming countries, as we tend to have houses with small gardens. Without access to a pool they would be at a disadvantage. Hence the idea grew and after speaking to Andy Bewicke one of the Directors at Hydropool UK Ltd the concept evolved to using a number of stores around the country for other swimmers. Sadly, this awful outbreak accelerated its effect on the world, and by the end of March quite rightly all communal pools were closed and as a non-essential store I closed my site just prior to the lockdown. As I was closing my store I thought why don’t I take a Swim Spa out of my showroom and crane it over their house into a garden so that at least one swimmer could keep training towards Tokyo. The lockdown would be for a number of months and this way someone would be able to swim safely.
Ed being Ed, selflessly suggested I speak with his Coach Mel Marshall about the idea as he knew there were others in the same position. (His training partner is Adam Peaty MBE). Once you speak with Mel, you realise she is one of those very special coaches (totally committed to doing anything she can to help her swimmers reach their goals) and a real person of action. She explained she was already worried about the effect the lockdown would have, as after about three weeks her top swimmers would desperately need to get back into water so as not to fall behind. But they needed to stay safe in their homes. After chatting with her she could instantly see how this could help, and hence we started putting a plan together. To be safe we would need Jacuzzi Swim Spas for each home for up to 6 months so the number quickly grew from the 2 I had, to 8 for all the main medal hopefuls. I then spoke with Andy Bewicke at Hydropool UK Ltd again (he, as always was amazing but must hate my calls by now!) explained the situation, and straight away Hydropool Inc wonderfully agreed to divert a significant quantity of UK stock at that time to help out giving the team a further 6 new Swim Spas on loan. A couple of days of intense planning and many calls to friends for help, we craned, positioned and installed 8 Swim Spas into 8 back gardens from Plymouth to Chester in 5 days. Looking back it’s weird that it was just a week from when the idea started. The only reason this was at all possible was thanks to the fantastic team I had of Nick, Anne, Glen, Garth, Paul, Steve, plus contractors who stopped working elsewhere and bent over backwards to help us like Steve, Stuart, Gerry Barry and Dermot. All the swimmers and their families were wonderful in giving us access to their driveways and gardens and being so kind.
On a personal note it just feels good when you see them getting back in the water and doing what they do best. The current climate is incredibly hard, it’s so important that we stay safe. All we did was allow 8 swimmers to work from home”.

James Guy who is now using one of Hydropool’s flagship 16ft Executive Trainer swim spas added: “It feels unreal to be back in the water again, a massive thank you to Bedfordshire Hot Tubs and Hydropool. The support that I have had from them has been second to none and the way they have conducted themselves around me and provided me a pool is unbelievable. To actually be in the water every single day is amazing, you don’t actually realise you miss it until it’s gone. I am doing real sessions in there and its definitely going to give me an advantage for next year leading into the Olympic games.”

Mel Marshall, Head Coach for Swim England also shared her view: “With the Olympics moved to 2021, we had a window of three weeks where no swimming was going to be ok for the athletes. However, beyond that we needed to somehow find our way to water. However, Hydropool® were able to do one better and bring water to us!!! Jim has worked tirelessly over the last week to make this possible and the team will be forever grateful for making this happen. On a personal note the current climate is incredibly hard, and it’s important that we stay safe. To now be able to do this and train at the same time is just incredible.”

Andy Bewicke, Business Development Director for Hydropool UK Ltd also added: “This is an amazing collaboration on a number of levels. First and foremost, getting our GB Swimmers back in water and training for Tokyo was our number one concern.
We are huge supporters of what these people achieve for the nation and the opportunity to help and become a small part of the journey was incredible. In addition we see it as a valuable opportunity to showcase the training and wellness benefits that our products can create which in turn can help drive performance in the Olympic Swimming Pool. I am excited to see how the collaboration can develop and would like to thank Mel Marshall, Ed Baxter and Jim Rumley for their continued support “

About Hydropool Inc
Headquartered in Mississauga, Canada, Hydropool Hot Tubs Inc. originated in 1970 as a commercial swimming pool company and in 1978 became one of the first hot tub retailers in North America. Our products are now sold through a 250+ retailer network in over 40 countries. https://www.hydropoolhottubs.com/

This site uses cookies. By continuing to browse the site, you are agreeing to our use of cookies.